We were humbled by the outrage and disappointment expressed and the continued support offered by so many people. Some opponents of change, however, still seem to doubt the strength and constancy of public support for a change in the law. In the light of this, I reviewed the evidence on public support and found two clear themes

Most importantly, this is true regardless of who initiates the poll. As correspondence from the Ministry of Justice noted in 2015,

The statistically robust British Social Attitudes survey suggests that a substantial majority of people agree the law should be changed so that terminally ill, if not other, people can be assisted to end their own lives. There have been several other surveys of varied statistical merit but none of these has reported a majority opposed to change.

As reported in the 2016 British Social Attitudes Survey the overall trend in support of assisted dying has been stable since 1983. On the issue of whether the law should allow doctors to assist a terminally ill person to die, public support has been consistently around 80% between 1995 and 2016. The 2014 YouGov survey of 1,727 adults showed 77% support a law allowing terminally ill adults the option of assisted dying. A poll of 5,000 people by Populus in 2015 demonstrated that 82% of respondents wanted to see a law that would allow a terminally ill, mentally competent person, with a prognosis of 6 months or less, to have the option of an assisted death under stringent safeguards. Interestingly, even polls commissioned by organisations opposed to choice at the end of life, such as a 2014 ComRes Poll, indicated 73% support for safeguarded assisted dying law. 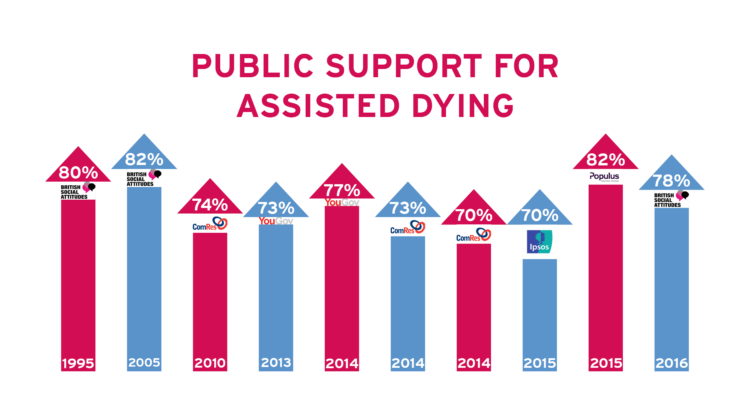 Public support for assisted dying is consistently strong and has been for more than three decades. Contrary to what some opponents of assisted dying suggest, that support is not indiscriminate.

Language is important. We do not campaign for assisted suicide because the people we support are not suicidal; they are dying and want the choice to control the timing and manner of their death. This wording best represents the situation these people face, and this is the legal framework favoured by the public.

The 2016 British Social Attitudes Survey reports that there has always been less support for allowing someone medical help to die where they are ill or disabled, but not terminally ill.When presented with arguments both for and against assisted dying as was done in the 2014 YouGov survey support remained high, but the public considered and rated the effectiveness of different arguments differently. This demonstrates the ability of the public to weigh information and consider the complexities of an assisted dying law. Most importantly it highlights the obligation that we have as campaigners to provide clear and comprehensive evidence around all aspects of choice at the end of life.

We know that “statistics are distrusted and picked apart, particularly if they run counter to someone’s existing point of view.” So whilst opinion polls findings will often be questioned, on the subject of assisted dying there is a clear body of data which shows consistent and informed public support.

As we fight to seek justice for Noel conway and others like him, we remain undeterred in our commitment to facilitating informed and respectful public dialogue, explaining why the current law does not work and clarifying why our proposed assisted dying law will provide the peace of mind and dignity that all dying people deserve.