After learning of his diagnosis, Bob Cole made the brave decision to tell his story in support of a change in the law. He was committed to the campaign, originally getting in touch with us when he decided to talk to his local paper about his wife Ann who had an assisted death at Dignitas just 18 months prior.

I should be able to die with dignity in my own country, in my own bed. The law needs to change.

He joined us at many campaign events, including standing shoulder to shoulder with other supporters in several of our demonstrations outside Parliament. 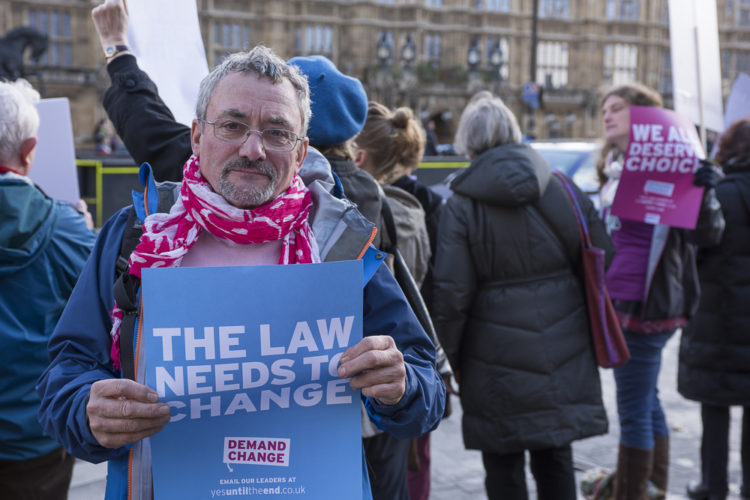 Despite the best efforts of his healthcare team, Bob experienced severe pain and wanted to control the manner and timing of his death – something he knew he was unable to do in this country.

Bob’s decision is yet another reminder that the current law is broken. Parliament’s job is to fix the law so people like Bob and his wife Ann are no longer forced to travel abroad to simply have control over the manner and timing of their own deaths. The British public know that the law as it stands is cruel and lacks compassion, which is why 82% support a change in the law.

Bob knew from his involvement in the campaign the importance of engaging the public with the reality of the current situation in Britain and when deciding to share his story he was clear that he wanted to continue supporting the campaign after his death as he had done whilst he was alive.

Do you have a story to tell?

Telling personal stories can be extremely powerful. We are building a network of people willing to share their experience to help us strengthen the case for law change.

We know stories are very personal, so rest assured that we will not publicise anything until we have spoken to you and you’ve given your final approval.

If you have something to share please let us know using the form below.